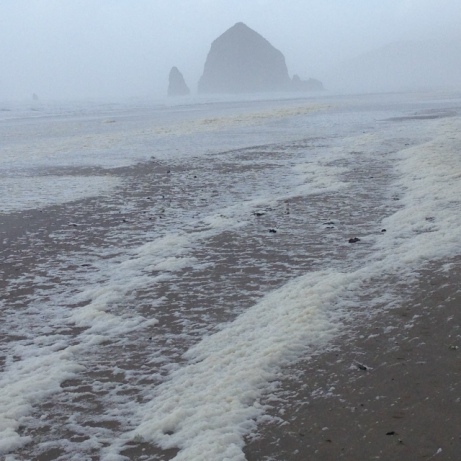 They flew in a ragged formation above the beach, but something seemed off. “They’re flying backwards!” I realized. A strange sight — but a familiar feeling.

We were dealing with the aftereffects of a Pacific typhoon along the Oregon coast; the waves were huge and the winds terrific. A rare tornado touched down in the next town down coast. Rain, thunder and lightning were intermittent. It made for good watching, though. I could sit comfortably and watch as the waves, bolstered by the high tide and wind covered the beach. The giant logs left from previous storms, some three feet in diameter and twenty feet long, were rolled around the beach like leaves on a pond. Small dunes and embedded logs were all rearranged. Large clumps of sea foam collected into wads and strands and blew down the beach.

The birds were smaller than gulls, maybe terns, and they flew about twenty feet above the beach. However, the winds from the south were so strong they could make no headway against it, and even flying as hard as they could, were being pushed slowly back.

It was another eerie aspect to the day.

The previous night, the power went out in the whole town — as the pessimists predicted. It interrupted the Bronco game, mercifully saving us from watching the disastrous second half. We lit candles and sat around the table with glasses of wine, telling stories and listening to the gale-force winds.

Dawn appeared with no power, no hot coffee and no hot breakfast. There was some grumbling about the best vacation rentals having breakfast in bed and room service. Shortly after the power came back, the tornado alert took over. We huddled in an internal hallway with no windows and contemplated the vagaries of weather and the possibility that one of us might be claustrophobic. We did remember to take cups of hot coffee with us.

A few summers before, vacationing in the same house, we had been panicked by tsunami sirens and blared announcements to evacuate. We gathered some belongings quickly, loaded everyone into the car and followed the line of traffic up to the ocean overlook at the top of a nearby hill. After a while, watching for the giant wave (that never materialized), we began to get thirsty and hungry. One of the kids had grabbed a bag of chips on the way out of the house, but we adults had preferred to gather wallets, keys, laptops and cameras – really indispensable items. We all wished for some beer and more chips, and tried to assert our adult authority over the kid’s chips … unsuccessfully.

Our annual beach vacations are supposed to be relaxing get-aways, spent sipping coffee or wine while watching the waves, clouds and a parade of people and dogs on the beach. We investigate the tide pools and the flotsam on the tideline while strolling across the wet sand. The water’s cold — too cold for old bones and circulatory systems. It was even too cold on our early vacations for the kids who wore wetsuits, but still came out of the water blue and shivering. The big emergencies back then were helping to untangle kite strings, or chasing an errant kite down the beach and across the nearby yards.

Back on the beach, some gulls were trying to duck under the winds by running and flapping along the sand, but got caught and flipped up into the gale, quickly soaring out of control back down the beach. Even in retirement, I can relate to the feeling. You push and push to get something done, to get somewhere, then some person or event comes along and tips the table over. Sometimes, its accidental, but more often than I like to admit, it’s done on purpose.

How do you cope with that? Like the sea birds, I have tried to just soldier on. It seems to work for them. Just keep my head into the wind, eyes on the prize – just do my job.

In between shocking gusts, the birds came back, working furiously to push past the wind to their destination. Their perseverance and drive was amazing. I could hardly stand up in the wind, but these six-ounce creatures as fragile as kites were winning their way – pushing through.

On the beach the tide continued to ebb and flow; unaware of the desperate struggle taking place in the sky above. Just like me and my daily struggles, my hard-fought battles are largely ignored by the rest of the universe. The struggle is mine, the winning or losing is mine. All I can do is keep trying – push on.

After the storm had passed, the beach was different. It looked normal. But the sand was swept clean of old sandcastles, bonfires, debris, and footprints. People and dogs returned, and the birds flew with little effort up or down the beach, on errands I didn’t understand.