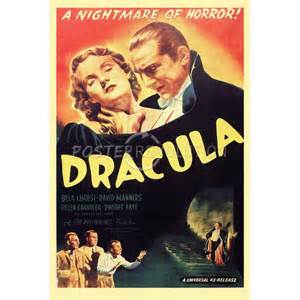 “Bwahahaha, I vant to bite your neck!” he exclaimed as he leaned over the pretty young girl mesmerized by his crazy eyes. Scrunched down in the theater seat, I had to hide my eyes behind my hands, so I missed the next part except for the wretched scream — but my imagination filled in the blanks and it would haunt my dreams for weeks.

The vampires of those old movies, always filmed in black and white, always with creepy Eastern-European accents, and always, always old, sleek and horrible, were contrasted against their victims, who were uniformly British or American, docile and handsome if male or beautiful, naive and scantily-clad if female. Usually dressed in formal evening wear, the vampires could readily be identified by their need for pure blood and the absence of their reflection in a mirror. They often had a harem of vampire women (putting the vamp in vampire). Garlic warded them off (bad breath?) and only sunlight or a wooden stake through the heart could kill one. They could turn into a bat at will, flying away to escape capture.

As I entered the room, I noticed that there were no mirrors. Instead of creepy old men (present company excluded), a handful of phlebotomists, mostly female and all friendly, greeted me warmly. They wanted my blood, but none had Eastern-European accents and there was plenty of sunlight across the room.

I joined the dozen or so people donating blood or blood components for a wide range of patients, including infants, who needed it to recover from incidents or surgery, or to fight cancer or other problems. Whole blood (red blood cells) can be stored for up to 42 days and can be used to replace blood loss, while platelets are necessary for lifesaving cancer therapies, open-heart surgeries, blood disorder treatments and organ transplants — but only have a shelf life of five days.

The process is pretty easy. First you go through an education and screening step. It’s helpful if you can remember the details of your recent medical, travel and sexual experiences (which can be more difficult for us old people), then they check your blood pressure and other vitals. The worst part for me is the finger stick to determine the iron content of your blood. In the old days, they used a sliver of glass to barely prick the end of your finger. For some reason, the abrupt sting of it really affected me. Now, they have a new device that you barely feel; however, my relic memories of past trauma persist but the nurses are always very understanding.

If you’re donating blood, you simply lie down on something between a fainting couch and a strato-lounger, get a blood pressure cuff on your arm, squeeze a ball, and suffer through a “tiny prick”, most often imagined rather than felt. (Okay, that statement is ripe for jokes; however I will refrain. You’re on your own.) You lie still, contemplate the universe or your sins, and generally feel like you’re saving someone’s life — which you are. It takes fifteen or twenty minutes, you get unhooked, bandaged, snacked, thanked and released. You can see the red blood in plastic pint bags (if you want), and you’re now officially a hero.

You can also donate blood components, platelets or plasma. The process is similar to blood donation, but a little more complex for the nurses. You do pretty much the same process — lie down, get pricked, squeeze and lie still. Since this process takes a couple of hours, I’ve learned that there isn’t enough time to fully contemplate my sins, so I watch a movie on the personal TV screens they provide. I usually get an action or scifi film that I won’t watch at home (but never a vampire movie). The nurses will bring you drinks or snacks, and help you set up your laptop, reading material, music or TV channels, if you’d like. All you have to do is lie there, squeeze and stay still (Okay, enough with the crude jokes. Maybe you need to contemplate your sins for a while.).

The machine pumps your blood out and through a centrifugal separation process. The platelets, and sometimes plasma, are pulled aside, and everything else returned with a little extra solution that keeps it all working. The platelets are disc-shaped and form a yellowish fluid, the plasma is pinkish. The technology is pretty cool, not unlike what Dr. Frankenstein used to animate his ‘monster’ (It would be cooler if they had the Jacob’s Ladder or Tesla coil from the movie in the background). They offer you snacks and drinks when you’re done, and you feel monstrously proud to have done it.

So, you get to feel like a hero (hell, you are a hero to someone), it only takes a little while, you get to contemplate, read or see a movie (that you probably can’t watch at home), enjoy pleasant company, get free snacks and drinks then come out rested, relaxed, and proud.

Contrast that with leaving the movie feeling scared, nervous about those creepy shadows in your room, and afraid to walk down the hall in the dark. (Of course, you do get to remember those beautiful, naive and scantily-clad females.)

So, the next time you think about going to a movie, just go donate blood instead. Really, it’s no sweat off your brow, and what’s a little blood between friends?