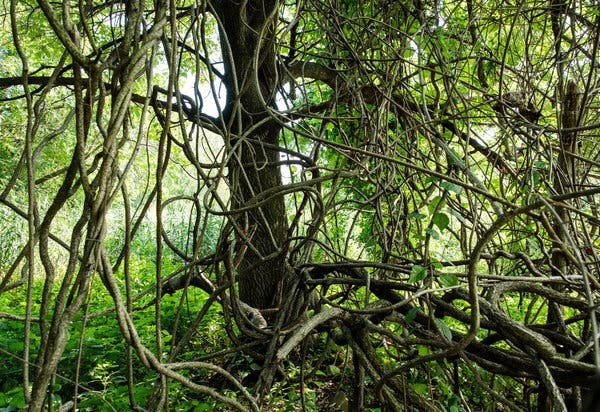 “From a coyote’s-eye view, you could see what the trees were up to: Growth, failure, decay and the drip of acid water through the gravel were mixing a dirt out of the detritus. This hideous forest, I suddenly realized, was there to repair the damage done, and not at our bidding. Its intent was not to look good. Its intent was to stay alive, year by year, century by century, until at last it had recycled even the nylon stocking.”
~ William Bryant Logan

It’s a familiar sight: Vacant lot covered in weeds and saplings around the edges. Neighborhood kids build forts out of abandoned Christmas trees and feral cats haunt the brush searching for mice and rats, and an occasional homeless person beds down in the farthest corner out of sight. Depending on the neighborhood, humans dump their trash and old mattresses in the middle of the lot. Low spots foster moss, algae, and mosquitoes, and maybe even a few small frogs or salamanders.

If we leave nature alone, undisturbed, the natural wildness suits the site. Once disturbed, though, nature has a way of reclaiming sites in an uncontrolled, chaotic succession. Anyone with a yard to tend knows that nature doesn’t really want to grow the way we want it to. Nature seems to have a plan that doesn’t include our preferences.

For example, we bury lots of our trash in many different places. Depending on what the trash is that we bury, we devise ways to manage the long-term encapsulation of the materials. We design liners and covers to minimize leachate and erosion and prevent intrusion into the material. However, while nature may be daunted by our efforts, she is not defeated.

Arborist William Bryant Logan writes of his visit to a New York landfill, “At the time of its closing in 2001, Fresh Kills contained more than 150 million tons of New York City garbage. Where there had once been salt marshes and wildlife, gas-emitting hills of garbage rose up to 225 feet high.”

“However, a recent visit revealed, that much in the way of new life had emerged since then. There were few trees atop the hills of capped trash, but in the valleys were thousands … No one had planted these trees. There were oaks 70 feet in height and more than a yard in girth … we walked into a rolling landscape where the soils were part dirt, part garbage, part riprap gravel. The makeshift stream beds were pus green. Willows struggled along watercourses that were edged with thick rinds of stone. Some cottonwoods had managed to reach a respectable height, but most had been pulled down by hydra-headed vines. Scrawny red maples ran uphill right into a descending phalanx of branchy black cherries …”
“One hollow mulberry had been dangling root filaments from inside its trunk into the soil, so when the mother went down, a youngster was already arising. This is called phoenix regeneration.”

At a long-closed chemical weapons site overrun by native plants and wildlife, much of the waste was encapsulated in an on-site landfill. When the area was turned over to the US Fish and Wildlife Service (FWS) for ownership and long-term management, a question arose regarding the FWS plan to introduce buffalo to the vast site. It turns out that the landfill was the highest point in the sprawling reserve, and would probably attract the teenage buffalo, who, just like human teens, like to hang out in groups where there’s a vista. In doing so they would depress the dirt of the cap and wallow in the low spots. That would create catchments for precipitation that could eventually infiltrate the cap and cause leakage. Other landfill considerations besides buffalo included deep-rooted native plants like sage and rabbitbrush, as well as burrowing prairie dogs.

Most of us see vacant lands in urban areas as disturbed places where litter collects. Of course, some litter escapes us unknowingly, but most of it is intentionally tossed — beer bottles and cans, cigarette butts, newspapers, fast food wrappers and cups.

We decry non-degradable packaging in the hope that litter will decompose over time as it is exposed to the elements. This assumes that human nature will not change and we will continue to litter. However, as reported by Healthy Food House, a company has “devised a clever new type of coffee cup with seeds inside the walls. Therefore, as soon as you are done, you can plant the cup and the seeds grow … What’s more, the seeds in the cup are local to the region, meaning that the plants grown will be appropriate for the local ecosystem!”

Maybe, if this approach catches on, our vacant lands will regrow even faster and better than they do now. Of course, I suppose we run the risk of just encouraging people to toss their coffee cups away. “Hey, I’m not littering; I’m revegetating!”

It would be nice, though, to see a fast food lot overrun with vegetation.