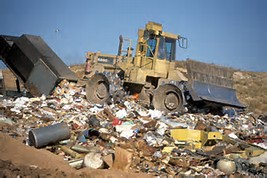 “Whatever you do, don’t make any jokes about organized crime,” she said and gave us a serious look.

It was just after the passage of the national solid and hazardous waste laws (Resource Conservation and Recovery Act of 1976), and companies that had landfills and other waste disposal facilities had to complete a ton of paperwork. I was part of a team of consultants sent back east to the corporate headquarters of a major waste disposal firm.

Three men entered the conference room where we were compiling data for the hazardous waste permit reports. Like the others we would meet from the company’s various facilities around the country, these guys were big and sturdy and wore their expensive suits like costumes donned for the benefit of corporate execs.

As we shook hands, I realized that theirs were the calloused and gnarled hands of working men, not the smooth and comparatively tender hands of consultants or executives. Their faces were guarded and somewhat ominous due to the flattened noses and occasional scars. Their careers began ‘riding the trucks’ – manning the garbage trucks and picking up trash. Over time they became managers of disposal facilities — by doing everything that needed to be done at their facility.

The changes we represented for them were daunting. Some of their facilities had operated for decades; since long before there were laws or regulations governing what they disposed and how they disposed of it. The real knowledge of each landfill or other facility rested with these guys and their employees rather than the meager records they brought for us to review. They knew the business from the ground (or below it) up.

There was a lot of suspicion about what we were doing and some of the guys were pretty defensive. Our client, the corporate attorney, helped to keep them cooperative and got them to talk a whole lot about the waste disposal practices in the pre-regulation days. The company that hired us had their own facilities, but had acquired a whole slew of smaller and regional companies over the previous decade, so they had little actual knowledge of some of the operations. Since we had to document most of that for the permits, this was a good chance for the corporate people to find out more about what they owned, as well.

The corporate managers that sat in on the meeting with us wore their expensive suits more comfortably, but still had the earmarks of having ‘ridden the trucks.’ They could veer away from the data we needed to discuss all kinds of operational issues, and several times I looked around to see the team in wide-eyed wonder at the revelations. Once or twice the attorney would suggest that a given conversation be moved to a more private setting.

We learned how wastes were disposed over time and discovered first hand why landfills had such a bad, and deserved, reputation. It started with people needing to get rid of their refuse and deciding that just tossing it into the street was a bad idea. So, trash men would take it away for you – at a price. Usually there was one guy in town that hauled the trash, and he’d dump it in a ravine or hole somewhere. Gravel pits were great repositories, since someone made money by digging them up and selling the gravel … then making more by letting the trash guy fill it up for a price. A clear win-win!

And, of course, there were problems. Gravel pits tend to be in areas near streams, so groundwater could be an issue. Rainfall could leach the pollutants out of the trash into the groundwater and then into wells or the stream. Dumps were smelly and attracted vermin. Rats, ‘dump chickens’ (seagulls) and crows flourished and could become disease vectors. (A time-honored tradition at night in small towns was to sit at the dump with a flashlight and .22 rifle and shoot rats.) Burning the trash could combat both the smell and the attraction for vermin, but created a lot of disagreeable smoke. Covering the trash with a layer of dirt was a better solution, but required more effort.

There were also no controls over what could go into the dump. Prior to WWII, most industrial trash wasn’t too dangerous (there are many local exceptions), but the economic boom of the ’50’s created a lot of waste and new chemicals that were also dumped. These could be dangerous themselves or in combination. Fires and pollutant dispersal became more of a problem as more and more wastes were dumped. Decaying waste created methane gas that could accumulate in the dump or move through the soil to buried sewer lines or building basements. Methane explosions blew manhole covers high into the air, caused fires and killed quite a few people.

In our meeting, we spent a couple of hours with the representatives from each facility. Then another group would arrive and we’d start all over again. Usually, by the end of each interview, we were all pretty chatty and the guys with the tough hands were less reserved.

They knew their lives were changing and were accepting of it (with a little encouragement from the corporate execs). They had long dealt with local politicians, had overcome their issues with workers’ unions, and learned how to merge into a mega-corporation’s culture.

But they could still be a little crusty with the naïve consultants and their soft hands. At the end of one session, we were chatting in a friendly way about all bizarre stuff they had taken into their landfill in the old days. The conversation took a turn to all the large animal carcasses they’d had to take following a major flood.

I forgot the earlier warning from our client, and blurted out, “Do you have Jimmy Hoffa in there, somewhere?”

The room fell silent and the client gave me an alarmed look. The biggest guy looked me over, then gave a wide grin, “Naw. he’s over in Tony’s landfill in the next county.”

We all laughed with him, but I was glad to get out of there the next day.