Lying on top of the bird feeder, it appeared to send an ominous message to the small birds that routinely feed there. It was nearly as large as some of the smaller birds, and seemed placed to establish dominance, like wolves marking their territory. 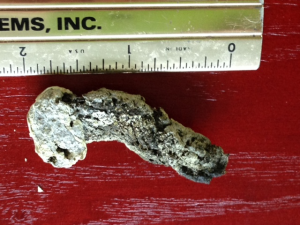 It reminded me of the turkey scat my dad used to show me, pointing out that male scat was ‘j’ shaped and female was straight. Like most bird scat, one end was white. It was the right size, and the shape could have indicated a female, but it was hard to imagine a turkey on the feeder, much less in my backyard.

We keep a couple of bird feeders filled most of the year, and a couple of hummer feeders when it’s warm. So, we have a cadre of full-time birds – house finches, sparrows, blue jays and others – and several sets of seasonal birds that stay the summer – hummers, pine siskins, goldfinches, grackles, doves, etc. Geese fly over our yard frequently, but I had never seen goose poop in my yard, and it was hard to imagine some dropping from the sky.

I read that people create community by sharing food, so it follows that by feeding the birds we have created a community. Every year for the last 34 years, our neighborhood has had a block party where we get together to visit, share food and do some square dancing. But the real attraction is refreshing our ties to our neighbors – some of whom we only see once a year at block party time..

In my yard, we share food and our place, and the birds share their songs, eat insects, and occasionally leave us a gift in the form of a feather. I read somewhere about a small girl who fed the ravens and received colored baubles in return. The baubles were bright scraps of paper, pieces of shiny foil, and such things. It’s not hard to feel that they appreciate what we provide.

We too often think of ourselves as living within some kind of bubble of humanness. We interact through electronics with other humans; we live and work in buildings whose air is conditioned against the outside; we travel on man-made surfaces in bubbles that keep out the rest of the world. But in spite of our attempts to seal ourselves off from the natural, we are a part of it.

We routinely wreak havoc on nature intentionally or through clumsiness and inattention — and with one step can destroy whole generations of creatures and their homes. But we can also create homes for them and provide for their security and sustenance. We are at the same time friend and foe. I think that’s what it means to be human in the world, and our challenge is to achieve the proper balance of the two roles.

So my yard is home to a whole array of critters, including birds, squirrels, mice, snakes, occasionally raccoons or bunnies, once a doe and two fawns, once a moose, and a myriad of insects and invertebrates that I seldom or never see. But the main show is almost always the birds. There is near-constant traffic around the bird feeder just outside the kitchen window, where convoluted bird dramas worthy of a Mexican telenovela play out every day.

The birds jockey for position at the feeder and in the surrounding jump-off points. The little birds swarm the feeder in batches, up to a half-dozen at a time. Flapping, they switch places and chatter at or with each other. Suddenly they all scatter in a flurry of protest and chaos, as a big bird, a dove or raven or jay, swoops in to claim their spot, appearing like the Empire battleship at the beginning of the first Star Wars. Brave little ones will attempt to sneak back in to the off-side of the feeder, but are routinely shooed away. Another dove crashes in, causing the first to lose her place, but when they return, the jockeying continues.

Flickers occasionally land on the feeder and rake through the seed looking for insects. The spilled seed draws birds and squirrels to the ground, and I suspect, provides a meal for mice living in a nearby rock wall. While not on the feeder, the flickers work the lawn for insects, dunking their heads into the grass like wind-up bird toys. A flock of grackles descends upon the lawn, noisily chasing each other and unseen insects. A flight of ravens spreads out in the trees, loudly announcing their presence to the world.

Around the corner, the goldfinch and siskins peep away at each other on the finch feeder. A chickadee hangs in the nearby Mock Orange bush, curious to see what the others are getting. A few feet away the hummers zing their calls and swirl in the air around their feeder. Due to the number of hummers we have this year, we know there are hummer nests in the shrubs around the yard, and now the new chicks are fledging. We had a nest over the patio a few years ago, the tiny nest hanging at eye-level, giving us a good view of the chicks. The nest was made of grass and spider web and seemed to expand as the chicks grew. I like to think that they’ve come back to build their own nests and start their own families here.

We spent some time trying to determine what kind of bird poop I had found. I doubt that it was from a turkey or goose. Ravens are another possibility, as are the owls that we know hunt in the neighborhood in the evenings. We’ve also had Sharp-shinned Hawks pick small birds off the feeder, but have never seen them hanging around the yard.

I’m okay not knowing who left it. I’ll accept it along with the chatter and songs and stories that the birds bring. Of course, a feather would have been nicer.