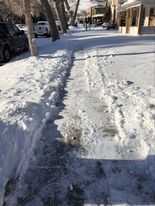 I was twenty-nine and ill-prepared for snow during my first winter in this Colorado house. It’s kind of like mowing the lawn — you feel some unexpressed social disapproval if you don’t take care of your yard and house. The neighborhood was established in the 1870’s and has sidewalks and very few driveways. The nearby college and our proximity to the small but busy downtown adds many more pedestrians to our street than there are residents. So keeping the sidewalks clear of snow has a practical impact, as well. I just wanted to stay in where it was warm after a snowstorm, but would see later in the day, to my chagrin, that nearly all the sidewalks but mine had been cleaned off.

Early on, we had about four inches of the white stuff one night, and admiring the beauty when I first got up, I became aware of a constant scraping sound. Out front, my 80-year-old neighbor, Mr. Shaller, mostly skin and bones, was shoveling my sidewalk after completing his. I went out in my slippers and thanked him, but suggested that he should let me do it. I was fit and an athlete (well, ex-athlete) and thought maybe it was more appropriate for me to do it. He just grinned and said he enjoyed the activity and it got him out of the house.

As time passed, I tried to get up early enough on snow days (very hard to do) to shovel our walks before he got to it. I was seldom successful. One year my older brother, also an ex-athlete, lived with me and some winter days, he and I would end up sipping coffee while we watched Mr. Shaller dig out our sidewalk. Mr. Shaller was determined. But on occasion, we could clear off the snow before he got to it.

After Mr. Shaller died and his wife moved away, my new neighbor, Tom, had a snow-blower and would circle the entire block on snowy mornings, clearing the main sidewalks. This was a real treat, as Tom seemed to enjoy it and it saved me and others some hard work. We still had to clean off the lateral walkways and our cars, but that was much easier. Of course, Tom has now moved away, too.

New people moved into that house a few years ago, so it’s back to the snow shovel and broom and the dance to see who gets there first. This year’s first snowstorm, yesterday, dropped five inches or so and it took me a while to get my snow shoveling rhythm back. However, I was able to not only finish off my sidewalk, but to clean off my neighbor’s — in honor of Mr. Shaller and as a token of appreciation for the home-made goodies our neighbors share with us. As a bonus, I even swept snow off the south side of the cars parked along the street in front of our house, to allow the sun to shine in and warm them up a little.

Frankly, I have to agree with old Mr. Shaller — on a snowy day it’s good to have an excuse to get out of the house and get some activity. It makes the warmth and the hot coffee more appreciated when you finally get back into the house.

Happy New Year to you all! May your year be full of warmth, hot coffee and a little competition to see who gets to the shoveling first!