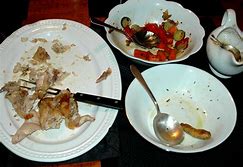 Growing up, I was encouraged to “clean your plate!” It usually wasn’t a problem, my mother was a very good Southern, country cook and we ate well, even when we didn’t have much extra money. My older brother and I were big and had big appetites.

One year, when we were in high school. our dad obtained a milk machine from an ex-client’s food counter. It was a big silver refrigerated box that held two five-gallon containers of milk, each with a tube that went down to a large weighted handle you would lift to allow the milk to flow out. It sat on the counter adjacent to the round kitchen table where we ate. You’d put your empty glass on the lazy-susan in the middle of the table and spin it around to the nearest person to refill it with milk.

If I ate too slowly (in his opinion), my older brother would pause his fork over my plate, “You gonna eat that?” We had different eating styles —he ate the best of his stuff first, completing each serving in turn — but I tried to eat a bite of each serving on my plate in turn before I finished. I usually left the best bite for last, which no doubt, served to tease my brother’s instincts.

My mother made really good pies, usually chocolate cream, lemon meringue, chess or pecan. One rule was that, because the first piece cut from a pie was usually messy, an extra-large piece was cut. We vied mightily for that first piece. As we got older, having pie for breakfast became the norm, something that was easy for us to fix and “good for you” (!).

I don’t remember ever having a problem with food waste. My dad made great sandwiches or other dishes out of leftovers, and there never seemed to be an excess of them around, due no doubt to the two large boys and an active younger sister. And we always had dogs, mostly bird dogs with a house pet here and there thrown in for good measure, and some leftovers probably went to them.

When I had a house of my own and was instrumental in buying groceries and cooking meals, I became conscious of tossing away edible food. (Of course, some would say I use a too-broad definition of ‘edible’.) It seemed like a waste of money and resource. My mom tended to use canned foods (the 1950’s modern miracle) back then, but if you use fresh veggies, you generate scraps from meal prep. There are usually incidental bits of leftover meals (‘ort’ according to my crossword dictionary) that could also be thrown away.

It always bothered me to just toss food away. It stinks in the garbage, attracts vermin, isn’t always good for the dogs (may result in ‘accidents’ in the house), and adds to the amount of garbage generated, meaning more trips to the back alley (because of both odor and volume).

As a sanitary engineer, I’ve worked on both garbage dumps and modern landfills. In the old days before air-pollution regulations, the dump was an uncontrolled mess until someone realized that you could eliminate a lot of the pests (mosquitoes, flies, rats, raccoons, bears) and odors if you just sprinkled the area with kerosene and lit it. This became SOP at most landfills until new laws required daily cover, liners to protect groundwater, surface runoff controls and controlled access. They also specify what kinds of wastes can be dumped.  At one time, a ‘landfill’ in Southern Colorado reported the “lightning strikes” that occurred at the dump every Friday evening.)

I started thinking about other ways to eliminate food waste. Obviously, eating up all the leftovers was a “waist” of a different kind. To avoid additional garbage disposal costs, I already composted my leaves and grass clippings, so I just added the food waste to the pile. I keep meat and dairy out of the pile, but that’s a small part of our food waste. Over the years the pile has evolved, and each spring, I take the pile apart and pull the undecayed materials to one side and harvest the black, rich soil from the center. The compost goes onto veggie and flower beds and the leftovers serve to start the pile for the next year.

There’s a strong sensory effect in taking apart the pile. The textures are varied, the rich dark soil has a clean earthy smell — very primal. Old leaves and grass clippings turn to dust as you break them up, worms and unidentifiable wiggly things evade the sunlight. In the midst of decay, you feel connected to Life.

I know not everyone has the space or capability to compost their food wastes, but it has worked for us, and we even get a return in that the waste ultimately helps us grow more veggies or flowers the next year. And maybe a greater benefit, I no longer feel guilty about tossing edible food into the compost.