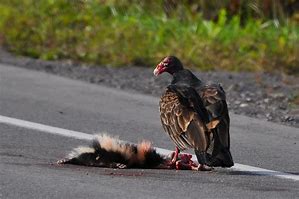 The destiny of the other items (in the freezer) was indistinct. They were for the consumption of the various occupants of the house, the whole food chain — bird, amphibian, beast and beetle, reptile, arachnid, man. A sign over the kitchen sink read, “EAT MORE POSSUM” in black on Chinese red.

I guess I never learned to be too squeamish about food.

Growing up in a Texas stockyard town, it was easy to get inexpensive meat. We had fried calf liver every week and usually boiled beef tongue on weekends for sandwiches. On special occasions, my mom would deep fry sweetbreads until they were pleasantly brown and crunchy. Calf fries were a restaurant treat on special occasions. We hunted and fished and, of course, ate whatever we had taken, filling our big freezer. It was mostly dove, quail, or duck and occasionally venison, turkey or goose, and perch, catfish or bass. On rare occasions we fished in the gulf and had sea trout or crabs.

We spent time in the country and had plenty of opportunity to see whatever critters were out there by identifying the roadkill that spotted the highways. Of course, armadillos were frequent victims, along with rabbits, possums, skunks, snakes, coyotes and domestic animals (farm dogs). Deer carcasses were seldom seen, as hitting one of them did enough damage that both the deer and the car would be removed relatively quickly.

Most frequently we noticed hawk or owl remains, and ravens, crows and grackles that had tried unsuccessfully to feed off the rabbit and other carcasses in the road between the arrival of vehicles. My drive to college in Oklahoma introduced me to pheasant, and I stopped sometimes to collect tail feathers off some that seemed relatively intact.

My dad once told us about driving the long stretch of highway south of Corpus Christi through the King Ranch, a desolate hot, dry empty place with only one or two places to stop. Ahead, he saw a buzzard in the road feeding on roadkill and assumed that it would fly off before he got there. They both misjudged the situation and the bird took off late, defecating as it skimmed over the top of the car, covering the windshield with buzzard crap. He hit the wipers to try to see, which only made the mess worse. He was able to stop and scrape a hole in the mess big enough to drive, then drove on to the next stopping place miles away. When he pulled up to the gas pump, he asked the attendant to fill it up, then ran into the bathroom, where he hid out for a while — this being a time when every attendant washed your windshield when you bought gas. I imagine that attendant got a big tip.

Writer John McPhee quoted an ardent roadkill observer: “Watching for D.O.R.s (dead on roads) makes traveling a lot more interesting. I mean, can you imagine just going down the road?”

However, my family never considered collecting the meat from roadkill.

In a recent article in High Country News, Ella Jacobson argues for greater use of fresh and undamaged roadkill. She quotes Joanna Young, a geoscientist and educator, who opined about a young moose she had collected, “… it was high quality, incredible, free-range meat, so we still consider it a big windfall.”

John McPhee wrote about his experiences with a biologist in Georgia who collected roadkill: “I lived on squirrel last winter,” she said, “Every time you’d come to a turn in the road, there was another squirrel. I stopped buying meat. I haven’t bought any meat in a year, except for some tongue. I do love tongue.”

Interesting concept. Think about driving the roads early in the morning or when it’s cold, and finding free meat, there for the taking. Sure, you have to take only undamaged parts; it can’t have been sitting out there too long, and you’d have to do your own butchering. It’s probably organic, and certainly leaner and cheaper than store-bought. It saves taxpayer money if volunteers clear the road instead of government workers, and the meat can be used to feed pets and other animals, as well as people. To the extent that it replaces meat from farmed animals, it’s better for the environment.

Jacobson notes that in Alaska, “State troopers who respond to these collisions keep a list of charities and families who have agreed to drive to the scene of an accident at any time, in any weather, to haul away and butcher the body.” However, the rules on carcass removal vary from state to state.

I don’t think I’ve ever eaten roadkill, but I’ve eaten lots of animals killed in other ways. I can tell you that goat or moose makes the world’s best chili; that wild turkey is heavenly; wild goose, being all dark meat, is incredible; and quail is beyond description.

Picking my way through the goose-poop covered sidewalk in a nearby park, I have often wondered why we can’t let the park managers harvest some of the geese for shelters or food banks. That’s how we manage other wild animal populations through hunting to keep them under control.

I’m sure that roadkill isn’t for everyone, but given the price of meat, and the number of hungry people, it may make sense. I’m sure there are health concerns, similar to eating any wild game, but these days eating romaine lettuce can be a risk.

Hmm, salad or roast venison? What do you think?