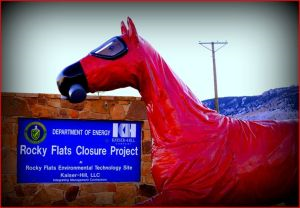 “But what about the plutonium?” he said, “If you breathe in even one atom, you’ll get cancer and die.”

It was a chat over breakfast with the old guys, and the subject of Rocky Flats, the nearby old nuclear weapons plant, came up. Following clean up, it was scheduled to become a wildlife refuge open to the public for hiking and horseback riding. But there was a lot of misinformation about it, and since I worked on the cleanup, I often struggled to get people to understand the science behind the allowable limits.

“You know, of course,” I began, “that one atom of plutonium won’t cause cancer or kill you. In fact, since Hiroshima and Nagasaki and the atmospheric testing of bombs in the fifties, sixties and seventies, the entire northern hemisphere of the earth has been contaminated by plutonium and other radionuclides.”

He shook his head, “That would mean that we all should be dying or have cancer right now.”

“Sure, but only if the premise that one atom of plutonium causes cancer and death is accurate.” I paused, “The world is full of things that can kill you. Not just earthquakes, tigers and velociraptors, but all kinds of minerals and microbes, and other people.”

“But we control those things so we’re not exposed — except for velociraptors,” He grinned, “It’s hard to control them.” We all laughed.

“Well, we actually control the extent that we’re exposed, we don’t prevent any exposure.” I let that sink in a little, “We have limits for how much of any given chemical is acceptable in our food and water and air. For example, there are standards for how many mouse or rat turds are acceptable in cereal or grain.” Everybody grimaced, and Tommy looked askance at his oatmeal.

I then tried to describe how such acceptable limits are set. “Think of three steps: source, pathway, receptor. First, we need data to determine the effects of the exposure. Let’s take tigers. Depending on the circumstances, if you confront a tiger there’s probably a one-in-ten chance he’ll eat you. So, you need to understand what possible circumstances or exposure there could be. You can reduce the time spent around tigers, you can pick times after the tiger has already eaten, and you can carry a chair and whip.”

“I’d rather have a big gun,” Ted remarked and we all chuckled.

“Another option.” I agreed. “On the other hand you could just kill all the tigers in the world.”

Ted rejoined, “Or just kill all the people and leave the tigers alone.”

“Yes, you got it right. It’s a tradeoff. We try to evaluate the potential risk against the costs and other factors. Tigers are an apex predator and their existence effects whole ecosystems. Do we want to mess with that? Do we even have any data or understanding of how that works?”

He shook his head.

“So here’s what we do: we identify an issue, and collect as much information as available about impacts and circumstances. We’re looking for the source, the pathway and the receptor.”

I went on to note that some sources are ever-present in the environment. Lead, arsenic, radium, petroleum, coal, all exist naturally, while many synthetic chemicals are derived from processing. Human actions can increase the potential for exposure to these sources through excavation, transportation, processing and use, often just by concentrating them to levels that can be dangerous or by creating pathways for exposure.

Where does the material come from? Does it exist naturally in some places, or is it introduced intentionally or accidentally? The Flint water crisis, for example, was caused by switching a water supply and the naturally-occurring water chemistry in the different water reacted with the lead in old pipes (source). The water system distributed the lead in the water (pathway) to allow it to reach people (receptors).

The pathway to a receptor can be through direct-contact, inhalation or ingestion. How does the material move or get to a receptor? Through wind-blown dust, leaks or spills into surface or groundwater, emission into the air, or by contamination of some product, including food.

The receptor can be whatever we’re worried about being harmed. It could be insects, birds, fish or other creatures, or even a human child. Exposure occurs when something from a source travels through a pathway to a receptor. The degree of exposure can be impacted by the amount or form of the material received, the duration of contact, and the condition of the receptor. The receptor’s condition may be important, for example, if the receptor is reproducing, at a sensitive age or stressed from another source.

“Yeah,” he interjected, “But plutonium is deadly. One atom can kill you!”

I smiled to myself. “Well,” I replied, “that’s not really true. Just like lots of things, plutonium’s danger depends on how much there is and what circumstances exist.” He looked skeptical. “Okay, what about pianos?” I said.

“One piano can kill you, unless you’re a cartoon character.” He looked at me funny. “If a piano falls on you, it’s deadly, right?”

“Okay, but what if it’s a toy piano, just a Barbie-sized one?”

“So, you can see that it depends on the circumstance. Say the Barbie piano fell from three stories and hit you in the head. That could kill you, right?” He nodded reluctantly. “The same is true for most materials, like water.”

“Yeah, lots of people are killed by water every year. It’s called drowning.”

“But that’s not the same,” He replied.

“Too much water in the wrong situation can be deadly. It’s the same with most things. My daily vitamins contain selenium and chromium. They’re good for me in the small amounts present, but in larger amounts, they’re poisonous. There are standards that limit their amount in vitamins, foods, drinking water and for worker exposure.”

I explained that those limits are set by a somewhat complicated analysis of, again, the source, the pathways and the receptors. If you’re worried about plutonium in soil, you need to estimate how much in the soil could be released through disturbance, how much is breathed in (note that some dust is also breathed out – it doesn’t all stay in you), how long you’re exposed to the disturbed soil (if you’re running, it’s a shorter period, but harder and deeper breathing), and how often you’re exposed (daily, weekly, monthly, yearly?). Then they can calculate the potential impact (toxicity, what are the odds of getting cancer?). Typically, regulators use a very conservative one-in-a-million chance that the exposure will cause cancer. Given the prevalence of cancer today (one in two men will develop prostate cancer in their lifetime), one in a million is a very slim potential increase in cancer risk from a given exposure.

He thought a minute and replied, “So, your point is that by burying the crap deep enough and making the old bomb site into a wildlife refuge, people can hike out there and be safe.”

“Absolutely.” I nodded, “Except of course for the tigers and velociraptors.”