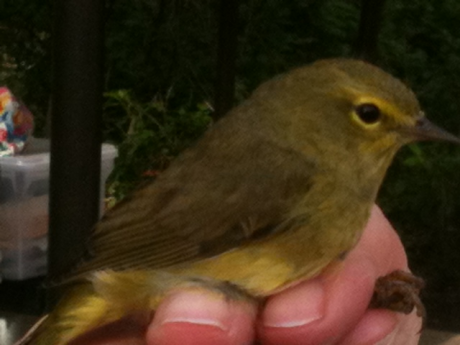 … it occurs to me that whereas I WRITE a poem by dint of mighty cerebration, the yellow-leg WALKS a better one just by lifting his foot.

Six or seven small brightly-colored bags hung from the pegboard. Occasionally, one would jerk or rock, then be still. Shirley takes one down carefully, opens it, and gently retrieves the small feathered creature within. She cradles it in both hands, then it emerges when she has a firm grip of its tiny legs between her two fingers. The bird flaps once or twice and is sheltered by cupped hands until it calms.

Six or eight “tourists” watch the activity, standing around the picnic table in the woods near the river, and vie for better views or photo ops. Shirley holds the bird out for us to see and asks who can identify it. Several of us guess, but it is one of Shirley’s assistants who properly identifies it as a kinglet. Shirley nods her approval and using a wetted finger, examines the bird’s crown. Scruffling a few feathers, she exposes a red patch, and finalizes the identification — a ruby-crowned kinglet.

Shirley is a bird expert with the Bird Conservancy of the Rockies (formerly Rocky Mountain Bird Observatory), working with the Greater Denver Audubon Society at their Chatfield Nature Center. Each spring, bird banding is performed at this site and the Conservancy site near Barr Lake, to intercept migrating songbirds on their way from Latin and South America to their summer homes in North America. The confluence of the mountains and plains, and the Platte River Valley, funnels the migration route through metro Denver. The avian travelers stop to rest and feed, and maybe stay.

For banding, fine-lined mist nets are strung among the shrubs and trees along the Platte River bottomlands where the migrants and local birds hang out. The nets have enough give that when a bird flies into one, it is folded gently and trapped. Experienced staff patrol the netting sites frequently, gently untangling the captured birds and placing them into the hand-made bags. The soft cloth prevents the birds from panicking and thrashing about and possibly injuring themselves.

Capturing the birds allows these organizations to identify bird types, weights, age and sex, and fat content, which are recorded by volunteers and reported in a national data base. Fat content and age figure prominently in determining whether the bird is a migrant or a local. Banding each bird allows for a historical record of its travels. Birders finding banded birds anywhere can access and update the data base for that bird.

At the banding station, Shirley holds the kinglet out for a quick photo by a young girl, possibly creating a school report. Shirley uses both of her hands to explain her measurements and details about these birds. Several of us try vainly to follow the bird-in-the-hand movements with our cell phone cameras as Shirley energetically describes what she is learning and her measurements. She patiently describes the sexing (by plumage), age and fat content (by inspection of the breast and throat) and weighs the bird in a small tube to keep it still. A tiny metal band with identifying information is placed on the bird’s leg.

When all measurements and observations are completed, Shirley motions to the young girl to cup her hands. She carefully lays the kinglet on its back in the amazed girl’s hands and lets go. It lies still. Then at Shirley’s instruction, the girl tilts her hands and the kinglet hops up and flitters away. The observing crowd offers a soft, “Oooh!”

In the next few minutes Shirley examines and bands a yellow warbler and a house wren. Then throughout the following days these efforts will continue to build the record, and allow the local and national experts to assess the health of bird populations across two continents.

This data is becoming more important as climate change and increased human development impact habitats. These kind of studies nation- and world-wide are telling us how the world’s bird populations are being impacted by climate change. Extremely sensitive to climate and habitat as well as relatively mobile, birds represent one of the first waves of climate change-impacted species.

I remember when, after living in Colorado for ten years or so, I was surprised by the first sighting of Boat-tailed Grackles in my yard. I knew them from the Texas coast in my childhood. That change in range was likely caused by shifting climate. We already experience the seasonal shifting of the bird species at my house as the mountain birds move down in the fall and the prairie birds move in during spring. And, the migratory birds pass through twice a year following their food and the warmth.

We’ve long known about the impacts of human development on birds. John Marzluff reported that the diversity of bird life in suburbs was greater than in pristine forests. Accessibility to bird feeders and secure nesting sites encourage bird occupancy, in spite of the prevalence of the greatest bird predators, house cats. Of course, not all species are similarly effected, and native habitat loss can still endanger many of them.

Bird collisions with buildings and wind turbines are also a feature of human development. Lighted skyscrapers have been responsible for large-scale collisions of migrating birds at night in many cases; however, building operational changes have reduced the occurrence. The damage caused by wind turbines has been exaggerated, and smart siting can ameliorate much of the impact.

In the meantime, volunteers like Shirley and organizations like Audubon and the Bird Conservancy of the Rockies will continue to study and collect data on bird populations and movement. Hopefully, we can use this information to inform the public and decisionmakers about our impacts on nature and our birds.

Steve Tarlton, Wind Turbines and Birds Go Around and Round, www.WritesofNature.com, February 15, 2018