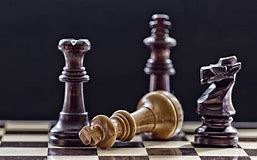 As the story is told by comedian Stephen Fry, the early Persian Shah wanted someone to give him a game that relied on intellect, not chance. That eliminated dice and cards and most other games known at that time. Finally, a man brought him a new game, Chess, played on a 64-square board. As a reward, the Shah offered to give the man anything he desired. The man, expressing humility, asked only that the Shah give him a kernel of rice on the first square of the board, twice as many on the second, and so on. Thinking that it was a cheap price to pay, the Shah agreed. But when his vizier explained that it would be more rice than ever grown, the Shah reconsidered, and had the man executed (Check and mate!).

Not being much of a chess player, I’ve had far more experience with checkers and various card games. Luck, good or bad, determines the outcome in most games, and finding games that minimized the role of luck is a challenge. In high school, my buddies and I got together on Friday nights to play Risk, a strategy game with cards that also used dice to determine a player’s moves and took several hours to complete. At the end of the game, when we were putting away all the pieces (representing the number of armies we each had on the board), our good friend ‘Fast Eddie’ would shake handfuls of our armies from his long sleeves. That was Eddie’s way of trying to control his luck (and ours).

My family used to hunt quail and other birds. Frequently, after a covey flushed and everyone had shot, one of us would pick up a downed bird, only to be challenged by another hunter. It seems that often a single bird in a flock of a dozen or more is targeted by multiple hunters. Something about it drew the eye. Usually, there was no specific reason why that bird should be targeted — timing, location in the flock or coloration. It was just bad luck (for the bird, not the hunter).

When I was young and an athlete, I learned that all athletes are superstitious. “That’s the way the ball bounces,” applies to virtually any sport (baseball, basketball, soccer, handball, football, jai alai, golf, tennis, badminton, etc.). We hone our skills and learn the rules, but a lot of it comes down to luck — “A roll of the dice,” “The luck of the draw,” or “The flip of a coin.” We try to appease the luck ‘gods’ by ritual (always put on the left shoe first, or no sex the night before a game — a rule many of us wanted desperately to break) or prayer (Coach Chuck Fairbanks used to tell us, “Don’t pray to win. Pray to play the best you can and winning will take care of itself.” I never figured out if praying to win brought bad luck.). ‘Fast Eddie’ and Patriot QB Tom Brady have a similar approach to bolstering their chances of having good luck.

They used to tell us to make our own luck and I suppose that’s what Eddie and Brady think they’re doing. But most of us think that cheating has no place in the game — cheaters are playing a different game than the rest of us. That’s why we get angry when the Russians or Lance Armstrong or anyone gets caught doping or otherwise breaking the rules.

In fact, that’s why we have rules and referees or umpires — to keep the playing field even. There’s an illustrative Arabian proverb, “Trust in Allah, but tie up your camel.” As a former regulator, I saw firsthand the need to regulate and enforce the rules. Most people follow them, but it becomes unfair to them if others do not. If your goal is to win at all costs, I contend it is no longer a game, but a war. Internationally, we have some agreements on what those rules may be, but enforcement usually entails an act of war anyway.

“You’ve got to ask yourself one question. Do I feel lucky? Well, do ya, punk?”

Skill, knowledge, effort and luck are all part of the game, and winning may require different portions of each for any given game. I contend, even some games as intellectual as chess still have a luck component.

After all, games are merely the reflection of life. Life is not always fair. We work at life using our skills and our knowledge, but in our hearts, we know that luck is right there over our shoulder just waiting for its turn.

That’s life, that’s what all the people say
You’re riding high in April, Shot down in May
But I know I’m gonna change that tune
When I’m back on top, back on top in June