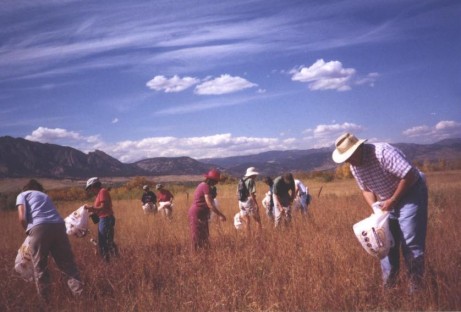 “Okay,” the young student volunteer said, taking a break from collecting native grass seeds, “we’re going to use these to replant all that disturbed ground,” she pointed over to the old nuclear weapons manufacturing plant site, “then global warming will come along and turn it all into a desert. What’s the logic in that?”

Several other pickers looked up and took the opportunity to rest their backs. We all were volunteers collecting the native seed for revegetation, since commercial seed is expensive and doesn’t contain the native genes of the grasses and forbs that developed at this site over time.

It was an interesting question, and frankly, one that had troubled me, too. I knew that the native plants here on the Colorado Front Range were relics of the primordial plains that once stretched to the Appalachians. These genetic survivors had weathered climate and geologic changes for centuries, if not millennia. They were adapted to these specific local conditions.

But climate change is upon us whether it is human-caused or natural. Andrew Selsky notes that wineries in Australia, California, France, Oregon and South Africa are having to adjust their vineyards to climate change. They’re “moving to cooler zones, planting varieties that do better in the heat, and shading their grapes with more leaf canopy.”

Researchers at the University of Waterloo have warned that reclamation plans for mega-mining projects such as the oil sands in Canada need to anticipate the climate changes caused by global warming. “Well-meaning reclamation plans that ignore climate change may prove to be a major liability,” said Rebecca Rooney, a professor of Biology on the Faculty of Science at Waterloo. “Most reclamation plans assume the environment, water budget and climate remain the same over time. Our research reveals the need for a more pragmatic approach to reclamation planning that will give these important habitats a more sustainable future. If these reclaimed landscapes fail, the public could be left with a staggering environmental problem covering hundreds of square kilometers across Canada alone — and billions in additional costs.”

Their approach uses modeling and site data to predict future conditions and adjust the revegetated species selection to reflect the future conditions. However, most reclamation sites are much smaller, have less funding and/or fewer regulatory drivers for reclamation than those they modeled (ergo: the volunteers collecting seeds at our site).

Climate change is a fact of nature. Over time, conditions change for a variety of causes. Ice ages come and go, widespread volcanic activity may cloud the skies, and even comets can have an impact (!). Historically, such changes occur over long periods of time or limited geographical areas, giving animals time to relocate or adapt. Most animals are mobile, and can merely move into new areas, although current residents may not take kindly to the new immigrants (many historic parallels here).

Vegetation migrates far more slowly, so rapid climate changes can be more devastating here. Plant species native to a given location have adapted to those conditions over time, and they may also be colonizing new areas at the same time. In addition, they continue to adapt, with the successful survivors carrying genetic material suitable for the changing conditions. Unsuccessful adapters generally fade away.

One problem we have is that we don’t have all the knowledge we need to know how ecosystems work now, much less specifically how they will respond to climate change. The United States Endangered Species Act was a first attempt to stem the tide of human-caused extinctions. According to researcher Jennifer Kahn, “one of the biggest impacts of the act isn’t the resuscitation of an individual species but the other benefits that effort brings. According to the act, protecting a species also means preserving its habitat, a provision that inevitably helps the vast number of plants and animals that happen to occupy the same ecosystem.” When he signed the act, President Richard Nixon stated, “Nothing is more priceless and more worthy of preservation than the rich array of animal life with which our country has been blessed.”

Ecosystems are a mix of plant and animal species that jostle and adapt to changing conditions. The prevalence of a given species will shift over time and other life in the system will shift in response. The best approach to managing those systems is to preserve the specific genetic traits that kept the system working over time, and try to protect them from rapid human-caused change.

Our seed-picking crew leader came over to the student and pointed down to the ground at her feet. “What do you see?” he asked.

She studied a minute, thinking it was a trick question, “It’s a whole mix of grasses and forbs. I see Big Bluestem, Indian Grass and maybe Cheatgrass. Also an aster, Buckwheat, and a couple of other forbs that I don’t know.” She was pleased with her answer.

The crew leader nodded appreciatively, “Which plant will adapt best to the new conditions?” he asked,

She shrugged, and he continued, “So, which one should we save?”