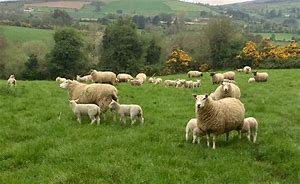 Bright green hills hedged with vivid gold or white and dotted with scattered woolly lumps — many larger ones accompanied by one or more springy smaller ones. Springtime in the English and Scottish countryside means lambs, lots and lots of lambs.

I am familiar with the cartoon lambs that leap and bound and wiggle their fat tails adoringly. In reality, those images are so watered down as to be nearly criminal. Imagine a field full of sheep, (white, black-faced, black-headed or black), nibbling grass or lying down (often nibbling, too), then overlay dozens of small furry, similarly-colored dots lying next to them or playing with the other lambs. Add a few nursing, their fat tails rotating as though to keep the suction going, and you have an English hillside in May.

The scenery everywhere was fascinating: sedate and bucolic or wild and tumbled. It was all seemingly out of a picture book. In fact the variety and abundance of incredible scenery blasted away my earlier notions of difficulty filming television shows or movies there — perfect locations were actually everywhere.

Driving the narrow country roads of England and Scotland was difficult, not so much being on the wrong side, the narrow lanes, or the sometimes slow tractors, but the sheer number of roadside distractions. Obviously, the sheep and lambs were entertaining. Cattle (‘coos’ to a Scot) appeared to be shying away from the sheep, but represented nearly every breed I could identify and a couple that I’d never seen before. Some very fuzzy coos of mottled colors resembled wild boars more than cattle. At one point in Scotland, a sign warned, “Caution: feral goats.” We saw several herds of Red Deer in the Highlands, but few deer elsewhere. Canals cross the countryside, with gaily decorated canal boats cruising or moored in clusters.

We also saw pheasant, wood pigeons, a Jackdaw sitting on a reclining sheep’s head, and massive displays of color everywhere. Bright yellow fields of Rapeseed (source of canola oil) flooded the view from Sussex in the south all the way to the Isle of Skye. Yellow daffodils scattered wildly across the land, bordering most roads and fields, not to mention the various stone cottages, churches and cemeteries. Trees bloomed in an array of white, purple, orange and pink, woodlands sprouted carpets of bluebells, and adjacent streams tumbled or seethed through glens of unimaginable beauty. The north introduced Gorse or Scotch Broom, yellow-orange shrubbery that joyfully intruded everywhere.

There were fascinating rock walls and hedgerows, often encroaching on the narrow lanes. Three-foot walls of gray stone encircled fields and ran straight up steep hillsides, defining territories or just separate grazing fields. Older walls can become entangled with the shrubbery that sprouted among and against the rocks, and their care over time, such as hedgelaying and pleaching, created nearly impenetrable barriers lasting hundreds of years. Rock surfaces display lichens of various colors and consistencies.

For anyone traveling to England or Scotland, I offer two preparatory resources for managing to communicate in a strange land. One is a Saturday Night Live skit about an Amazon Echo Silver designed for seniors. The other is a BBC skit about a voice-recognition elevator and two Scotsmen. (See links below) These two videos will provide you with the appropriate sense of ridiculousness necessary to face the rigors of a foreign land and the ensuing communication difficulties. You can more fully enjoy the adventure, rife with chaos and challenge and mistakes and foolishness. (“I don’t know ‘bout that.”)

(At an airport restaurant, the hostess chided me laughingly for announcing our party of two with a ‘v’ sign, but my palm facing me. Apparently that means “up yours!” in England. I asked if two middle fingers was more appropriate and got a grim in return.)

Our in-car GPS was invaluable, but sometimes, incomprehensible. Roundabouts are a challenge to drive left-handed, sometimes the signage is poor, and what does GPS mean by “on the next roundabout, take the third exit” when there are only two? Directed by the GPS up a small road towards the major highway, we ended up in someone’s front yard, then rerouted and landed in a farmyard. We spent a lot of time backtracking and circling, but eventually survived by shouting “uh-leven” at the top of our lungs. (see the video)

The food was wonderful, but we did get tired of eating out all the time, even in the better places. We found the pub food to be excellent, if repetitive, but enhanced by the array of beers available (see below). Fish and chips, bangers and mash, shepherd’s pie, sausage, neeps and haggis; it was all there to taste and enjoy. Breakfasts could be extremely heavy if you let them, the full breakfast including bacon, sausage, eggs, potatoes, black pudding, beans, tomatoes and toast. Potatoes seemed to be a component of every dish.

We also tasted some whiskies (Scotch, whiskey is bourbon or Irish) and was surprised by the variety of even the well known whisky brands available. For example, there were four types of Oban, and three types of Laphroig. We tried to avoid the tasting rooms at the myriad distilleries peppered across our routes, since driving was hard enough sober.

I will say that my favorite breakfast was in Portree on the Isle of Skye, where the porridge contained a wee dram of whisky. A little hot Drambuie starts the day off right!

Beers that I liked:

Bowland Pheasant Plucker (careful how you order this)