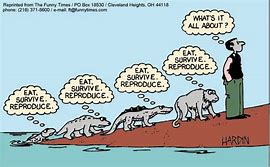 The great hope of the Enlightenment – that human rationality would enable us to transcend our evolutionary limitations – has taken a beating from wars and genocides, but only now, on the problem of climate change, has it foundered altogether.

Earth system scientists … say biogeochemical pollution is one of four “planetary boundaries” that we have exceeded, risking “irreversible and abrupt environmental change … the other three: climate change, deforestation, and biodiversity loss.”

We were talking about climate change, and my friend was extremely skeptical about the impact of human actions. He felt that this was just a natural cycle, repeatedly demonstrated in geologic history. I noted that the clear majority of scientists that had studied the issue identified human impact, carbon emissions and such, as the culprit. He conceded that maybe there was some impact, but humans weren’t the sole cause.

Given that there could be both human and natural causes of climate change, is there a chance that the impacts predicted to be globally catastrophic could be mitigated? If the answer is no, then we have no choice but to hunker down, compete with each other for the last scraps, and survive into a future bleaker than any apocalyptic film. (Think Mad Max.) It takes me back to the Cold War days when apocalypse was always hanging over our heads.

Climate change isn’t the only potential “irreversible and abrupt environmental change” that we may be facing. Biogeochemical pollution, deforestation, and biodiversity loss can be added to the list. Additionally, population growth and improvements in quality of life for a growing number of people will radically increase demand for basic needs and discretionary goods and services. People need food, shelter and water. Today, globally, we are only somewhat satisfying those needs.

And environmental change, whether natural or man-influenced, will shift and possibly eliminate many of those resources. As environmental change occurs, we’ll need to adjust the availability, distribution and demand for resources, not to mention the technologies that can be applied. The inter-relatedness of these issues defies easy solutions, but we must try.

The world has seen major impacts from environmental causes before. In the mid-1300’s, the Black Death plague reduced the population of Europe and Asia by an estimated 100 million people including approximately half of the European population. The plague had a major effect on European societal structure and inhibited the ‘discovery’ and settlement of the Americas. In addition, the introduction of European diseases into North America and the decimation of native American population led the first explorers to believe that North America was relatively uninhabited and ripe for settlement.

The Bible describes the world devastated by a great flood that, incidentally, is reported to have eliminated the last unicorns. And recall the extinction of the dinosaurs by a comet. Fred Pearce notes, “In the 1980s, biologists contemplating ecological meltdown began talking about “biodiversity” loss as a way to tag and measure the crisis.” One direct example of biodiversity failure was the Irish potato famine of the 1800’s, that resulted in one million deaths and the emigration of a million more, reducing the Irish population by between 20% and 25%, and shifting the demographics of the United States.

We know we have a direct impact on the functioning of the environment. Whether through Silent Spring-type impacts from pesticides and herbicides or from other types of pollution, we are changing our relationship to the environment and how it works. Whether these changes could exceed “planetary boundaries” and cause “irreversible and abrupt environmental change” is yet to be demonstrated.

We know that foreign chemicals are problematic in our waters, interfering with both the ecology and with human health. While we have taken steps to address some chemical and biological contamination, we are now cognizant of the threat of trash and plastic pollution on sea life. Already under stress due to temperature and acidity changes from climate change, the ocean environment is hugely important to continued human existence. And Fred Pearce also raised a concern regarding nitrogen pollution, “we must halve the amount of nitrogen we dump into the environment by mid-century or our ecosystems will face epidemics of toxic tides, lifeless rivers, and dead oceans.” The deterioration of our ocean ecology could have cascading effects on climate, food supplies, and human society and health.

So, these environmental impacts are not focused on just one potential effect. Climate change, pollution, deforestation and biodiversity loss effects are interrelated – the one affects the others. And in the middle of them all sits the human species. Human society has been formed by the environment, the world we live in. Our future will be equally shaped by what the world becomes.

Humans survived ice ages and more devastating environmental conditions; however, I don’t want to have to go through all that myself. I think it makes more sense to try to avoid approaching the “planetary boundaries” that cause “irreversible and abrupt environmental change”. In some ways, we’re pretty smart, so maybe we should just keep working on the solutions as if our lives depended on it.

Because after all, they do.