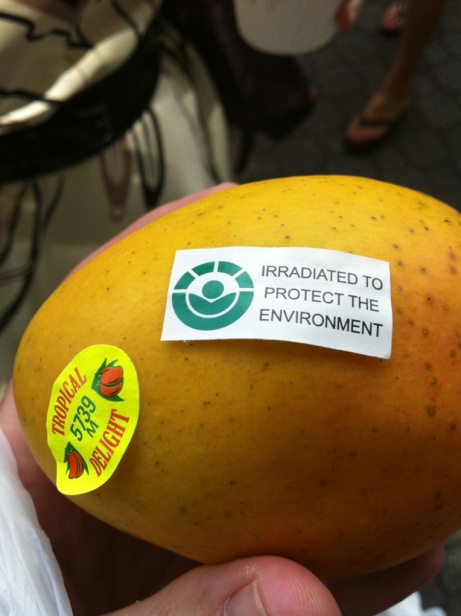 Since 2009, the world has been stuck on a single narrative around a coming global food crisis and what we need to do to avoid it. How do we feed nine billion people by 2050?

“Take a look,” he showed me a photo of a basket of apples wrapped in cellophane. “Apples and most other crops ripen at a specific time each year, all at the same time. So there will be a massive surplus of apples in the northwest every fall, but we cannot ship them fast enough to get them to market before they spoil. So we try shipping them in little cocoons of nitrogen to slow oxidation, but that’s not enough to kill off all the bacteria that lead to spoilage.”

He got excited, “Now, what if we could stop the bacterial decay, and ship them the cheapest way to wherever there’s a need?” I nodded. “We can. Right now we’re zapping medical supplies to eliminate bacteria and the same process can work on fruits, vegetables and all sorts of short shelf-life foods.” He took a breath, “Don’t you think Africa would accept shiploads of fresh apples during their next drought?”

My company’s medical irradiator was pretty new at the time, but the practice is common now. Irradiating foods, however, has never quite caught on in the U.S., due primarily to public resistance to anything related to radiation.

Apparently, when we hear the word radiation, we think of A-bombs, Hiroshima and Nagasaki. We have exaggerated reports of the effects of nuclear power plant failures like Chernobyl and Fukushima — all terrible events, but we seem to place more dread around them than other, more destructive disasters.

We can, and have, studied the effect of radiation for a century, and we’ve learned that it can be bad or good, depending on the circumstance. I think atomic bombs are bad, just like most bombs are bad. But the effects of radiation exposure are understood, and are not the globally-devastating decimation predicted by activists.

In some ways, nearly every thing, every chemical and every mineral, has both a good and bad possibility. However, with knowledge, we can manage these materials in ways that limit accidents and exposure. Occasionally, we screw that up, and the result is a Bhopal disaster, where a release of isocyanate killed thousands of people. However, we didn’t stop using isocyanate, but we did improved our practices.

Radiation is safely present in many aspects of our everyday lives. Smoke detectors are radioactive, we get dental and medical X-rays and CT scans, and we use radiation to fight cancer and sanitize medical supplies, including blood. We know a lot about natural radiation in our environment and foods. We live with radiation in a radioactive world.

Think of radiation in two forms, rays and particles. Radioactive particles are radioactive materials, and like dust, can be inhaled or ingested. So wearing protective suits, dust masks or respirators can be effective in minimizing contamination. Radioactive materials emit rays of radiation (i.e., gamma, X-rays) that can penetrate many materials. We use shielding (lead) and distance to block those rays, knowing that too much can be damaging.

An atomic bomb or nuclear reactor criticality emits radioactive rays locally, but particles produced by the event can travel great distances, hence, “fallout”. Irradiators usually contain radioactive materials and radiation machines produce radioactive rays and both are managed to direct precise doses of radiation at a target. Particles are not produced and the target is not ‘contaminated’. And the level of radiation is controlled to the specific purpose, such as destroying cancer cells, killing bacteria, or imaging your bones or teeth.

Meanwhile, the World Hunger Education Service states that 815 million people – one in nine – still go to bed on an empty stomach each night worldwide. One in three people suffer from some form of malnutrition causing over three million children under five to die each year and stunting the growth of another 165 million children. Estimates suggest that over seven million people die of starvation worldwide every year.

Researcher Sara Menker notes that by 2027, Africa, China and India combined will have half the world’s population and the world will be short 214 trillion calories. She notes,

“An alternative way to think about this is to think about it in Big Macs. 214 trillion calories. A single Big Mac has 563 calories. That means the world will be short 379 billion Big Macs in 2027. That is more Big Macs than McDonald’s has ever produced.”

(BTW, neither she nor I are proposing Big Macs as the solution to world hunger.)

There are all kinds of ways to increase the food supply, but many are impractical in the time-frame needed. Increasing production, focusing on less resource-intensive foods, and of course, changes in consumption habits (that may require those of us with calorie surpluses to stop indulging ourselves with the foods we like).

Today, food waste accounts for between one-half and one-third of all food produced. Food may be wasted at every stage of production: growing, processing, retailing, and consumption. However, if we could find a way to preserve foods for a longer shelf-life and make them easier to distribute, we could reduce the amount wasted and deal with the seasonal and geographic imbalances.

Food irradiation is already successfully practiced on certain products in certain countries. If we could accept the scientific knowledge and overcome our exaggerated fears about radiation, we could quickly reduce world hunger while other methods of increasing production and distribution are advanced.

Imagine saying to an African, “How do you like them apples?”

Eight-hundred and fifteen million people might think that a good idea.

Sara Menker, A Global Food Crisis May Be Less Than a Decade Away, TedTalks, August 2017