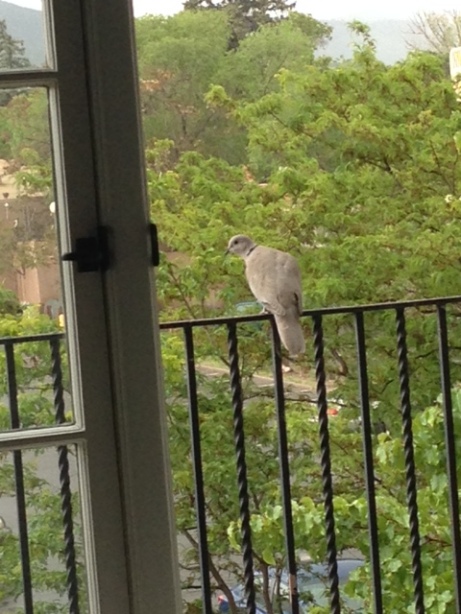 Now more than ever, in an age when children grow up staring at tiny screens all day and Earth itself is threatened by human heedlessness and folly, it’s critically important to protect those places and get out to experience them as often as possible. But it is not necessary to live exclusively in the world of wild power. The world most of us inhabit is enough.

The dead space between the motel wall and the fence was only about a dozen feet wide and, over the fence, the large gravel parking lot was dry and spare. Although such dead spaces in Albuquerque are often full of trash and a few desert shrubs, this space was green with grass and twenty-foot tall trees. The birdsong in the morning brightened the day and the greenery tempered my view out the window.

Gary Kaniya noted that, “Every city dweller deserves the opportunity to experience the transformative beauty and power of the wild … A little wilderness is better than none.” Some of us never get to the vast, empty expanses, the great untrammeled natural areas devoid of any human mark. Most of us live and work in areas where other humans live and work — in cities, urban areas, towns and suburbs. Some cities are experiencing a decline in green open spaces due to practices that consolidate communities, increase density and reduce sprawl. But in doing so, they may sacrifice the empty lots, lawns and big yards that provide the green space needed to naturalize and humanize a community.

Nature doesn’t require much encouragement to create a green space. Plants grow up through cracks in the pavement and birds nest in your porch lights. We spend a lot of effort trying to make nature fit some ideal of ours (perfect lawns, trimmed growth, uniform plantings), instead of just taking advantage of nature’s desires. Using native species, we can channel nature’s drive to exist and create places where nature can thrive in ways compatible with our uses. It doesn’t take a big effort or a lot of space; sometimes it means that we do less and just let nature go a little wild.

People decry the awfulness of the suburbs, but the ‘burbs are rife with greenery – lawns, hedgerows, flower and vegetable gardens, trees and roadside plantings. Compared to an inner-city street, the suburbs are a veritable wilderness. Children run across lawns, people sit on their patios and talk to their neighbors over the back fence. Bird varieties are greatest in the suburbs, due in part to the variety of vegetation and consequently, habitat.

But urban areas don’t need to have large lawns and massive plantings to benefit from greenery. Vegetation can be adapted to the particular circumstance. Street trees can be planted along most roads and those empty spaces in right-of-ways could include trees and other vegetation.

On my first trip to the northwest (coming from Winslow, AZ), I was shocked to see large mowers shredding the wild blackberry bushes in the freeway medians. Later I learned that the bushes are considered weeds there and do present real problems. However, the unmown blackberry medians were really pretty compared to the desert roads I was accustomed to.

When I was a kid, highways were lined with billboards, advertising anything and everything. Over time — due in part to Ladybird Johnson and the Highway Beautification Act — they became less prevalent and intrusive. (I do miss the Burma-Shave ads, though: “To steal, the kiss, he had the knack, but lacked the cheek, to get one back. Burma-Shave”). Now highway roadsides are more scenic and many states have roadside wildflower projects, where native flowers are nurtured and protected along the roadway. I think of the surrounded patches of greenery in clover-leaf intersections as “bird pockets,” accessible primarily to birds that can fly over the traffic and alight where they are relatively safe from predators, including humans.

I wonder if we could plant our roadsides to include a copse of native trees or clusters of native bushes (not blackberries?). That would seem to provide a more varied, and probably a more productive, ecosystem. It would likely improve the driven view, as well.

Compared to the large parking lot plantings in front of our Albuquerque motel, the little slice of green growth out my room’s window was insignificant in the context of a desert city. However small, it brightened my day and made me think that maybe we try too hard to ‘save’ nature in our parks and wilderness; we need to put more of that effort into where we spend most of our lives.

If we each saved a little piece of green land, or kept a small green space, that might just be enough. Take that empty spot back by the alley – it might be just right for a small tree. Or maybe that area between the fence and the sidewalk would support some bushes or vines. Most native plants are quite hardy, once established, so maintenance shouldn’t be a big consideration.

Edmund Burke, an Irish statesman who supported the American Revolution from afar, once said, “Nobody made a greater mistake than he who did nothing because he could do only a little.”

It doesn’t take restoring Pooh’s Hundred-Acre Wood to make a difference. Small steps make the journey. Take a small step for a small green space. Who knows where your journey might lead?