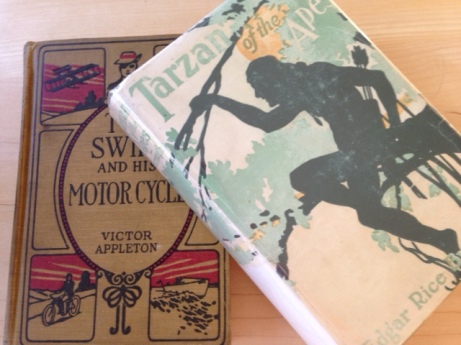 The whole world is festering with unhappy souls
The French hate the Germans, the Germans hate the Poles
Italians hate Yugoslavs, South Africans hate the Dutch
And I don’t like anybody very much!!

I’ve been rereading some of the juvenile fiction books I read as a kid, and found them very interesting. They go back to the early 1900’s, and run through the 1950’s. Most of them have very clear biases built into the story. As described by the authors, “Negroes” (or blacks when in Africa) are superstitious, lazy and generally humorous characters. The few Mexicans are unreliable, lazy and simple. Eastern-Europeans are the bad guys, devious, deceitful, and cowardly. Middle-easterners are crafty, sly, dishonest and under-handed. Asians (“Yellow-devils”) were inscrutable, unintelligible, and unscrupulous, but usually very polite. Indians were picky, argumentative, and prissy.

Of course, the American and English characters are upright, honest, true, intelligent, brave and loyal (sounds like Boy Scouts). All the girls are pretty or cute, perky, and defenseless. Even someone of English descent raised by apes in the jungle has these qualities, along with occasionally ripping some bad guy’s (see above) throat out with his teeth.

In college I experienced a wide array of people from different places. I shared a dorm with lots of blacks (as they were then known) and a pretty good mix of other types of people. There was even a Cajun from deep in Louisiana (we never pronounced his name right – He-bert rather than Abear), Italians from the East Coast, and Jews from Chicago. I had engineering classes with Asians, Eastern-Europeans, Indians and Middle-easterners, and my advisor was Turkish.

I was coming of age in college during the major social upheavals of the late 1960’s and early 1970’s. Framed by the assassination of a popular president and the resignation of a crooked president, we dealt firsthand with civil rights and racial equality, women’s rights, free love, birth control pills, the Vietnam War and inequity of the draft, Cesar Chavez, Roe v. Wade, and the assassinations of Bobby Kennedy and Martin Luther King. It was a lot to take in. (No wonder drugs were so popular.)

I think for me it was a process of shattering biases and perhaps creating new ones. All those different people I had read about were just like they were described in those books — except when they weren’t. Just as my white friends and neighbors were not really Boy Scouts in spite of being American, I knew that African-Americans, Hispanics, Eastern-Europeans, Middle-Easterners, Indians and Asians weren’t usually like they were portrayed in my youthful fiction. To some extent, in college I picked up different biases about sorority girls, frat boys, hippies and “Bible-thumpers” who all lived up to their stereotypes — except when they didn’t.

Some of the stereotypes had some basis, but I learned that recognizing the ‘exceptions’ usually depended on getting to know them as individuals — as individual people — not as stereotypes. Many people are superstitious, lazy, humorous, unreliable, lazy, simple, devious, deceitful, cowardly, crafty, sly, dishonest, under-handed, inscrutable, unintelligible, unscrupulous, polite, picky, argumentative, prissy, upright, honest, true, intelligent, brave, loyal, pretty or cute, perky and defenseless— regardless of ethnicity or color. Every person I know has most of those qualities and others, to some extent, depending on the situation. That sounds like humanity to me. We’re each only human.

I suspect this perspective was my father’s doing, and maybe my whole family played a part. I watched my father deal with all kinds of people and he treated each with equal respect. He admired people for what they could accomplish and how they treated others. I hope some of that rubbed off on me.

So, I am wary of stereotypes of most kinds, whether positive or negative. But I do have one bias that I feel I have learned and earned from experience:

people are wonderful and flawed, except when they’re not.