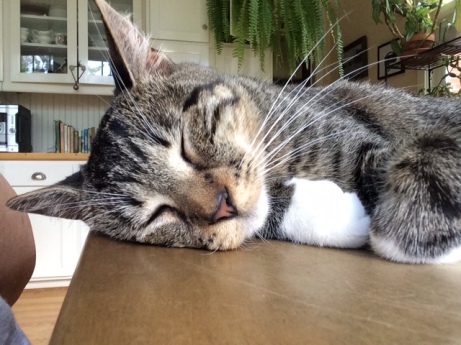 We had heard the shrill cries for a day or two, then one morning a sharp-shinned hawk landed on our bird feeder, just ten feet from our kitchen windows. It sat for fifteen minutes or so, then flew up into the nearby pear tree to the excited cries of the little birds gathered there. Birds all around the yard expressed their opinion about this interloper, as it shifted from branch to branch, then sailed off across the yard and away.

Over the next few days, we continued to hear the cries, and saw the hawk flash across the spaces between the trees or perch on a telephone pole. We soon discovered that there were two hawks, presumably a couple, haunting the backyards. I didn’t see them take a bird, but one tried in vain for several hours to grab a young squirrel off the lawn. The agility of the squirrel and short flight path kept the squirrel unharmed.

About a week before, our young cat had brought a small garter snake up onto the patio. Then she got bored or distracted and the snake crawled away. Cats are predators, and if they go outside, they will catch something. Later, she caught or found a mouse somewhere, and I discovered her rolling on the dead carcass in the dirt. She batted it around some, but since it was already dead and dried out, it was not too much fun.

I got to thinking, though, about how our young cat was pretty small, barely bigger than a grown squirrel. She spent part of her day chasing the squirrels around the yard, seemingly more interested in the chase than the capture. Did that make her a target for the hawk? Would a small hawk, like the one we were seeing, try to pick up a cat?

A neighbor says that a Great Horned Owl had tried one evening to catch his adult cat. It apparently scared both the cat and the owner who was standing nearby. But our hawk wasn’t anywhere near the size of a Great Horned Owl.

We recently bought some of our special brand dry cat food at a new store, and the cats both liked it. As I was refilling their bowls a few days later, I looked more closely at the bag and discovered that we had not gotten the special cat food, but the special DOG food. The guy at the store explained that cats are really carnivores — meat eaters – and this food is designed that way, with high protein content. Dogs, however, are omnivores that eat pretty much everything, so dog food tends to have more veggies and carbs. Getting a little potato, pea or rice in the cats’ diet wasn’t harmful to the cats; however, a dog eating just cat food would find it too rich and not get all the nutrients they required. We replaced the dog food, but the cats seemed a little unexcited about the real cat food. We’ll probably put out a bowl of dog food occasionally just for the variety.

There is a comic strip I remember from the Sunday funnies when I was a kid, called Rick O’Shay by Stan Linde. One that stuck with me had the fancy gunfighter, Hipshot, talking to the ranch kid about animals. The kid asks why some animals have their eyes looking forward and some have their eyes on the side. The gunfighter explained that animals that hunt prey, the predators, have their eyes looking forward to better focus on their next meal. The target animals, the prey, need to see things coming from many directions so they can escape. A perfect example is a jackrabbit being pursued by a coyote. The coyote’s eyes are set in the front of his face looking forward, but the jackrabbit’s eyes are on the sides of his head.

There’s a pause and the kid observes that people have their eyes on the front of their heads, too. Hipshot nods and grins slowly, “Yep.” That’s all he says.

2 thoughts on “Predator and Prey”