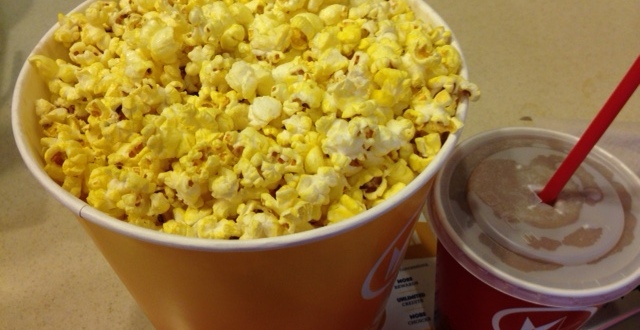 “Chomp, chomp,” woke me up in the middle of the night.

It was coming from my dormitory closet. My roommate was gone, and the sound made me apprehensive. “Rats?” I wondered.

I turned on the desk light and slowly approached the closet. I pulled back the accordion door, and jumped back. There beneath the hanging clothes at the back of the closet was a huge white blob. It recoiled from the light, tightly clutching the 5-gallon tin of popcorn my folks had sent.

I realized it was Daryl from across the hall. Daryl of the “stoner contingent”, wearing only his tidy whities, eyes like tiny beads, slowly scooping popcorn out of the tin and jamming it into his mouth.

He growled at my approach, but I was able to get him out of the closet, out of my room and even managed to salvage some of the popcorn. I needed a better hiding place or a better lock on the door.

I’ve always enjoyed popcorn. As a kid, we cooked popcorn in the big steel skillet on the stove, shaking and rattling the pan to try unsuccessfully to pop all the kernels and not burn the corn. We put it in big bowls to share and added lots of salt and real butter (they were both good for you back then).

Later there were pre-packaged stove-top aluminum foil containers that unwound while you cooked them and eliminated the need to use a pan. Air poppers next became popular and they allowed the natural goodness of the popcorn to be tasted without the distraction of the oil it was popped in. (Of course, if you used an air popper, you still had to add all the butter and salt to make it delectable.) Today we have microwave popcorn that comes with all kinds of chemical additives and flavors.

But through all the years, nothing has ever matched the flavor, feel and overall wonderfulness of movie theater popcorn. Standing in the lobby you could smell it cooking and hear the popping of the kernels. Some high school kid behind the counter liberally salted it, and sloshed melted butter (or something reasonably approximate) over the tub. If you were lucky or persistent, he might even put butter in when the tub was partially filled as well as when it was full.

We went to the movies every Saturday. Sometimes it was the neighborhood theater that showed cheesy B-grade (and lower!) films suited primarily for the local kids. Sometimes we were allowed to ride the bus downtown and go to the big, ornate theater that showed serious and popular films at night for families and adults, but on Saturday afternoons, we kids saw double features. One would be a film with known actors and actual plots, and the other would usually be shorter and less elaborate; more like the grade-B films we saw at the local theater. Before each feature there would be a newsreel or cartoon, and in between they showed the continuing serial (much like TV shows) in black and white. Earlier days, according to my dad, the serial would be Flash Gordon or Sheba, Queen of the Jungle, but we got others, like Jungle Jim, the Lone Ranger and Charlie Chan.

The numerous breaks in the action — when they changed reels on the projector — gave us time to hit the restroom and the snack bar again for another coke, more popcorn or candy.

One Saturday at the downtown theater, the double feature was two monster movies, The Beast with Five Fingers and some (even) lower quality film. We sat in the front part of balcony, on the last row before the crossing aisle. My brother and I loaded up on large popcorn and cokes, then settled in to get through the newsreel and cartoons for the real stuff.

The first movie was suitably suspenseful, and being susceptible to the dread building up on screen, I slid lower in my seat, clutching the popcorn. I placed my feet on the back of the seat in front of me and made myself even smaller.

The tension built, the monster lurked near the unsuspecting young woman, oblivious to her impending doom in spite of the increasingly threatening music. Suddenly, something grabbed my shoulder, and I leapt up with a shout, throwing my popcorn up into the air. Popcorn rained down on the usher leaning over me from the aisle behind, as the cascading popcorn showed up as black shadows on the screen where it interrupted the light from the projector.

“Uh,” he stammered, “keep your feet off the seat.” He brushed popcorn off his uniform and walked away.

My older brother was pretty disgusted, and gave me that look. But he did give me money for another popcorn at the break between films.

I settled in for the second film, sure to keep my feet down and carefully hoarding my fresh popcorn. The Beast with Five Fingers had an involved plot with well-known actors (well, I had heard of Peter Lorre) about a famous pianist murdered by a rival, who cuts off one of the pianist’s hands. In a completely unpredictable move, the hand returns to exact vengeance against the rival. (Like I suggested, these films were pretty involved.) The film proceeds with numerous instances where the hand crawls up behind the rival, only to have him walk away oblivious to his danger.

I sink deeper into my seat, my head barely above the seat back. The tension builds as the hand appears from behind curtains and across the back of the sofa where the murderer lounges. Out of the corner of my eye, something moves, and I freeze, trying desperately not to look but terrified not to. Next to my shoulder, a hand appears, fingers twitching, seeking revenge. I leapt up with a cry, throwing popcorn into the air, raining down on my brother and me, and showing up as black shadows on the screen again.

My brother removed his arm where it lay across the seat back, brushed some popcorn off his shoulders, and gave me that look.

“No more popcorn for you,” he said.