It watched us warily through beady brown eyes. Suddenly, it jumped straight up in the air and bolted through the brush. Larry and I jumped in surprise, then tripped over each other.

Larry was a city-raised high school buddy of mine who had never had the opportunity to go out in nature much, so my dad got him to go fishing with us out on a client’s ranch that had some big farm ponds. Although I had been there a lot, I soon learned the pleasure of showing off the experience to someone new. (Later I realized that my dad had the same pleasure with us kids.) We fished some, and Larry pulled in a big bass –so excited that he drug it halfway up the bank when bringing it in. 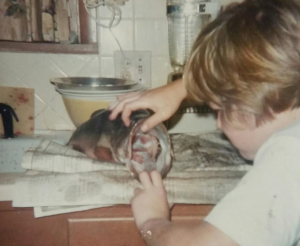 Larry’s bass and my sister

We also did lots of scouting around; just looking at the weird and wonderful things you find in nature. Interesting rocks, seed pods, flowers, bugs – everything was interesting to fresh eyes, and it made me appreciate my experience even more. That’s when we saw the armadillo.

If you don’t know, armadillo migrated up into Texas from more tropical climes. Their escape mechanism is to leap straight up into the air, then scamper away. The tactic does not work well with oncoming cars or trucks on the highway, so they are often seen as roadkill. But they fall into the ugly/cute category of critter and are pretty harmless. Their claws are quite formidable, but are kept beneath them for digging, not for attack. They eat insects and probably some roots, and their shell protects them from most predation. They are also very quick — but not good for distance.

We picked ourselves up and, honoring our primordial instincts, began to chase whatever it was running away from us – the armadillo. It ran about thirty feet then dropped into a small depression, which it was quickly digging deeper. All we could see through the flying dirt was the armored back and tail. Larry grabbed the tail and tried to pull it out of the hole, but it didn’t budge. We tried to get a grip on the shell to no avail. We got a stick and tried to lever it out, but quit when we thought we might hurt it. We backed away and watched.

Again, it popped straight up in the air and we both did the same, but avoided tripping over each other this time. We chased after it, with Larry hot on its tail. Now, this part of Texas doesn’t have much timber, and where there are trees, they are mostly scrub oak and mesquite. Neither is a “real” tree, they are more like large bushes. (In elementary school I was puzzled by tales of the pioneers clearing the wilderness and building log cabins. I tried to picture how you built log cabins out of the short, twisted logs from mesquite, scrub oak and live oak. Then, when I was older, I saw a pine forest!)

So, Larry is barreling down on the armadillo, which decides to go under a patch of scrub oak. Larry is intently focused on catching the critter, and only becomes aware of the trees when a branch looms directly into his face. He flings himself backwards, feet flying out from under him and crashes down into a tangle of brush. Wanting to be supportive, I had been following Larry closely and was caught off-guard by his abrupt change of direction. Honoring his sacrifice, I tripped and landed on top of him. Luckily, he shielded me from the worst of the scrapes and scratches.

Larry and I untangled again, brushed off the dirt and sticks, and continued our chase a little more tenderly and cautiously — if no less determined. Somehow we managed to corral the beast, and I picked it up the way you would a turtle, holding the shell on both sides. It flailed its feet in the air, then settled down to see what would happen next. I turned to Larry, “We got it. What do we do now?”

Larry and I exchanged glances. We hadn’t gotten past the chasing stage in our minds, so actually catching it was a new experience. (Not unlike my experiences with some sorority girls when I got to college, but that’s a different story.)

Larry looked over at the nearby farm pond, “Can it swim?” he asked. My dad shrugged.

We carried it to the pond and gently tossed it out a few feet into the murky water. It bobbled about for a minute, then began to dog paddle around, seemingly very comfortable in the water. It stayed parallel to the shore until far away from us, then came out of the water, looked us over, and scrambled off.

We watched it go. Larry was looking pretty smug — what a story he had to share back home. I wondered if the armadillo would tell its story as well.