The prairie stretched in front of us for several miles. “What do you see?” I asked.

Sara looked around with that half-bored expression teens sometimes have, “Grass,” was all she said. 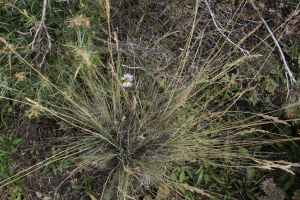 “Look down, then.” I instructed, “What’s right here beneath you?”

She looked askance, then looked down, “Well, some grass. Some rocks, some of those little white flowers.” She looked up challengingly.

We squatted down and I pointed out four different grasses, a handful of different forbs and several insects.

“Prairie is more than grass,” I noted redundantly (us old guys can be redundant sometimes, in fact, most teens would say, always.). She nodded and began to ask what each plant was. I noted that there were more than 50 species of grasses and forbs in this area and called one of the range botanists over. They were quickly immersed in a discussion that encompassed botany, geology, soil science, meteorology and climate change.

Several times a year, a group associated with the North Jeffco Nature Association collects native seeds on or near Rocky Flats, the site of a former nuclear weapons plant. The plant was demolished, cleanup was completed and reclamation is underway. Student groups often participate, and the seeds we collect are used to regenerate the prairie that existed before the plant was built in the 1950’s. Re-vegetation is necessary to prevent soil erosion and restore habitat needed for bird and animal life, and the local seeds contain the native genetic strains that evolved there.

So, what is ‘natural?’ We talk about pre-development conditions, but before the plant was built, cattle grazed the area and hay fields existed in some places. There was a stage station on the old Denver-Boulder road, and the orchard planted there still shelters a deer herd. The original homestead is slowly crumbling away, and the great horned owls claim the barn loft as their domain. The railroad grade that replaced the road remains visible in spots, and it is speculated that the faint rings visible in aerial photos were originally Indian encampments.

‘Nature’ is generally considered to mean ‘non-human’. We think in terms of ‘pristine’, ‘untouched’ or ‘unsullied’. I wonder whether such places actually exist. Humans have been around for eons, and have been impacting the planet in various ways. We’ve taken resources (trees, plants, water, minerals) with little heed for conservation. In fact it is believed that the demise of large mammals in North America is due to prehistoric hunting. Large parts of the Amazon rain forest are now thought to have been developed and farmed by indigenous peoples. Native Americans burned the prairies to improve the grasses for the buffalo, which they then harvested. Air pollution of all kinds drifts around the planet and ice cores from glaciers, the Arctic and the Antarctic catalog our history of industrialization.

We are of two minds about nature. We like green grass, but that usually requires watering, feeding and mowing. Our trees provide shade and beauty, but usually require trimming, leaf raking, and sometimes treatment for disease or pests. Insects serenade us with their clicks, buzzes and chirps, but whining mosquitoes cause us to retreat behind our screens, windows and clouds of bug spray. If we don’t control our world, we end up with places where insects, snakes, rodents and predators abound. Nature has wildfires, avalanches, poisonous plants, rugged terrain, prickly plants and creatures, and few clean toilets. Nature is uncivilized, inhuman, dangerous. We think our water should be clear and cool, and not full of weeds or crawly, swimmy things like we find in the wild. We like the thrill and excitement of the wild, but also the calm and clean of a sedate, friendly nature.

In most places where man has disturbed or destroyed nature, nature has eventually come back — sometimes with our help. We re-vegetate disturbed areas; we plant seedlings after forest fires; we re-contour steep slopes, and re-channel (or de-channel) streams and rivers. We’re even taking down a few dams to allow the streams (and salmon) to run free. In every vacant lot we can see nature striving to reassert itself without any help from us.

Does this return it to the original condition? Probably not, but we’re not really sure what that means anymore. Will it look natural? Wild and ragged or neat and trim? Which do we want? I would propose that a project adjacent to an ancient forest should closely mirror the wild and chaotic. But a project in an urban area needs to be a little bit ‘managed’, so that it fits in with nearby lands and uses.

We have changed the world, changed nature, and we’re not going to reverse that trend. But, we can make our daily lives more attuned to the nature we can accept. We don’t need wolves in downtown Detroit, but they are just fine in Yellowstone. Prairie dogs do just fine on the prairie, but don’t need to exist in an urban area. We may change a piece of the prairie so that it is no longer a suitable place for prairie dogs, and the likely conflict is not about the critters, but about our decisions on the land use.

As well as a large number of municipal parks, Colorado has open space and mountain parks that have only minimal development. This allows access to the ‘wild and ragged’ places adjacent to urban areas. People don’t have to commit to a complicated expedition to a national forest or wilderness area to get a taste of the wild.

So, we need to understand how we use the land we have and how we can best encourage or accommodate nature in it. Nature will intrude if we don’t find a way to work with it instead of in conflict. And we want nature with us. Studies show that nature makes us smarter, more awake and better people. We like the trees and grass and interesting birds and critters, but we need it on terms we can accept.

“Hey,” Sara called me over, “Smell this.” She held out a bunch of leaves.

“Yeah. Cool, huh?” She wandered off inspecting other plants.