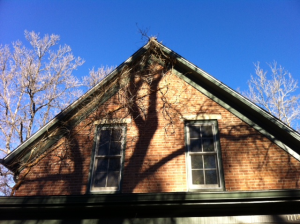 This is dedicated to Marion Galant, a friend who recently passed following a second bout with cancer. In our memories, she remains a part of us.

The old apple tree came down during the night. Fire blight and age combined with the wind and finally took their toll. It leaves a large empty spot in the yard and a hole in the sky and is a loss to my sense of community.

When I moved here in 1978, the tree was already huge, towering over the back corner of the house, paired with an equally large pear tree on the other corner. Both trees had fire blight; the apple more so. A tree guy came and looked at them and suggested I go ahead and cut them down, since they’d die soon anyway. (His resume touted tree removal, but nothing in the way of tree planting. I sent him away.) Since then, every afternoon the apple had shaded the patio, and the pear has shaded the western side of the house, keeping the bedroom a little cooler each summer.

The two trees are likely relics from old orchards that existed through the neighborhood when it was first developed in the 1870’s. There are a few huge scattered apple trees around, all shrunken with fire blight, but of a similar girth. We still get pears occasionally, but they are small and hard and high up in the tree. A friend once used the roof for access to the top of the apple tree and gathered several loads of apples for applesauce. The fruit was small and not particularly tasty, but the squirrels would gather them and chew through to the seeds; then drop the rest to the ground. I raked them up for the compost, but if allowed to dry, they made walking barefoot under the tree uncomfortable. The bark also provided sustenance to the squirrels in the winter, and the deader branches were stripped bare over time.

The apple tree was central to the flow of traffic across the yard. It was the only access to the roof from that side of the house, and in combination with a ragtag boxelder, allowed the squirrels above ground movement across several lots. Sitting on the patio, we had a excellent view of their aerial dexterity; the flying leaps and swinging branches kept us amazed and amused.

My bird feeder was bracketed by the two trees and the house, and the trees served as staging areas for feeding priorities. The little birds would hang back and give the bigger ones primary access. A flicker, grackle or jay landing on the feeder sent up a spray of smaller birds, who retreated to the tree to wait for an opening. Youngsters would often sit on the lower branches and demand that the parents bring the sunflower seed to them. The chickadees would carry the seed back to use the larger branches for an anvil and with their beak as the hammer, open the seed. From the kitchen window, we could get close to the flickers and downy woodpeckers hunting through the branches for bugs. The squirrels could peek in and greedily eye the fresh fruit on our counter, but were (mostly) deterred by the window screens.

For a while, the largest low branch held one end of a wide hammock, big enough for two. It served well until the fateful midnight that the hammock broke (I suspected too vigorous usage), spilling the occupants onto the ground. It was unclear how the two injured parties received scratches in those places.

The same branch later held the swing that occupied my son for hours. When he was older, “To the moon, Alice!” (courtesy of Ralph Cramden) was the signal to send him as high as possible. He was never as afraid of the height as his parents, and several times we scared ourselves with our strength.

Our old lean-to kitchen finally had to go, so we excavated at the back of the house for a basement, and stacked a kitchen and master bedroom above. A key component of construction was the preservation of the apple tree, which was accomplished with some expense. Construction was further complicated by the well and the cistern.

The old back porch had a crawl space accessible from the cellar, which was reasonably spooky. We found various artifacts of previous users there, but the surprise was a cistern. Apparently in the old days, the roof drains were directed to the cistern, where water could be pulled up into the porch next to the kitchen. It was about five feet across and eight feet deep, lined with grouted brick. I believed that this was the well that my older next door neighbor swore was under the porch, even when I explained about the cistern.

A few feet away, but outside, we found the well by accident. While pulling up an old concrete sidewalk, we suddenly faced a black void. My first reaction was to regain my balance and back away, Merrilyn immediately ran and contained our son. Rounded river stones lined a hole about five feet in diameter down about thirty feet to the water surface. The total depth turned out to be about thirty-five feet. My neighbor was somewhat smug about it all. We were able to save the well, but the cistern had to go.

We built a bed beneath the tree and added flowers, ground cover and some interesting rocks to provide some company. I believe most trees need to feel they are part of something, and giving them a context makes them, and us, happier.

Now the sun hits the patio until very late afternoon when the sun drops below the mountains. We use an umbrella for shade, but the view is changed, and the picture of our yard is no longer framed by the apple tree. The birds have alternate perches, and the squirrels are pioneering different routes. We’ve found other, not as good, places for the wind chimes and bells, but we’re getting used to it.

This tree was a central part of the community that was this yard, these critters and plants, and our house. None of this community is permanent, not even us, but it will adjust and adapt to change as it always has. There will still be squirrels and birds to watch and leaves to rake and flowers to tend. We will sit in the shade at the end of the day, and the light will hit the yard just so, emphasizing the greens and the greys and the splashes of color from the flowers. Rainbows will form in the spray from the sprinklers, and life will go on.

But, that old apple tree is still there in my memory and still a part of it all.

One thought on “The Old Apple Tree”