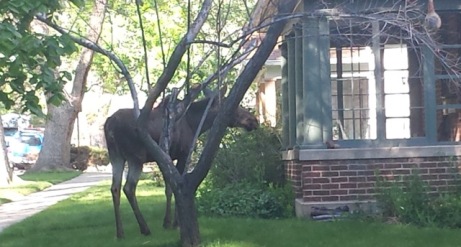 “We are stealing nature from our children. Now, when I say this, I don’t mean that we are destroying nature that they will have wanted us to preserve, although that is unfortunately also the case. What I mean here is that we’ve started to define nature in a way that’s so purist and so strict that under the definition we’re creating for ourselves, there won’t be any nature left for our children when they’re adults.”

After a week of arguments, I dragged the geologist and the soils engineer into my office to figure out their problem. It turned out the issue was that, using geologic science, the measurement was done one way and measured in a given unit. On the other hand, the engineer used another method of measuring the same thing, and in different units. Neither could accept the other’s data.

I have seen the value of diversity everywhere, from solving technical problems, dealing with neighbors and even selecting where to go to lunch. You can’t have everyone running around willy-nilly or you never get anywhere, but working through different views results in a stronger answer. Every team I’ve ever been part of has had different individuals with different skills, different experience and different philosophies working towards the same goal. Some people have been completely bizarre, but were often the one contributing the critical bit of information.

Naturalists and environmentalists have sounded the alarm for the demise of nature for decades. I believe that saving species and habitats is critical to human life as well as natural life. E.O. Wilson discussed his concept of preservation in sanctuaries free from human interaction for certain species and habitats. While I agree in part, his “half earth” approach assumes that humans and nature are mutually exclusive.

The earth is made up of systems. These systems include a huge diversity of energy sources, climatic conditions, terrain, vegetation and biota. Just as an aspen grove cannot exist without the subsurface microbial life (mycelium), every system has its critical components, as well as the basic requirements of air, water, energy, and habitat. To be successful, all components of the system are required for optimum health of each.
True, humans have disrupted many of these systems, creating conditions hindering success. I believe that instead of eliminating humans from every system in order to preserve them, we need to think about how to integrate humans into those systems with minimal disruption. Some may require the reduction of human interaction and some may require more integration of human and natural systems.

Fred Pearce observed, “Whether migrating elephants in Kenya or monarch butterflies in North America, much nature exists predominantly in human-made agricultural landscapes.” John Marzluff reported that bird species were most diverse in city suburbs.
Emma Marris noted, “… we evolved on this planet in the context of all the other animals with which we share a planet, and all the other plants, and all the other microbes. And so I think that nature is not that which is untouched by humanity, man or woman. I think that nature is anywhere where life thrives, anywhere where there are multiple species together, anywhere that’s green and blue and thriving and filled with life and growing.”

I suspect the ultimate solution will not consist of a single answer, but of many actions and long-term efforts to responsibly integrate humans into natural systems and nature into human spaces. The suburbs and exurbs may provide some ideas. Most have discrete footprints of structures and open areas with differing degrees of vegetation. Most suburbs have diverse biota, ranging from insects, reptiles and birds to large and small mammals.

My small town has lots of trees, a nearby creek, medium-sized residential lots, diverse vegetation, several parks and adjacent undeveloped areas. In my time here, my neighborhood has seen snakes and lizards, squirrels (lots and lots of squirrels), raccoons, foxes, mice, rabbits, wood rats, deer, elk, and, once each, a black bear and a moose. A plethora of birds reside here and visit the neighborhood bird feeders, shrubbery and trees. Hawks of several types abound – the sharp-shinned frequently pick a bird off my feeder and we had a red-tailed hawk nest in one of the tall trees. Several owls haunt the night and perch on rooftops.

Outside of developed areas, agricultural areas can also be used in ways that support wildlife, as discussed by Twilight Greenaway, “Silvopasture is one of several practices commonly grouped under the term agroforestry. The other core practices include wind breaks, which were planted en masse from Texas to North Dakota after the dust bowl and remain in effect in many places; forest farming, which produces everything from fruit to mushrooms to medicinal herbs; alley cropping, which involves planting rows of trees between rows of crops; and riparian forested buffers, which use stands of trees to absorb excess nutrients and agricultural chemicals before they run into streams, rivers, and other waterways.”

Hedgerows serve as windbreaks, but also provide habitat for a wide variety of animals, including insects, birds, and small mammals. They can be critical habitat for pollinators, whose habitat is under attack in many places.

We humans share our spaces with many other humans and their pets, and have developed habits or norms for how we interact. It may only be necessary for us to evolve our acceptance and reverence for nature to create similar practices for integrating with nature on a broader scale. We need to see that we are a part of nature, not its foe.

“I mean, 71 percent of people in the US live within a 10-minute walk of a city park. And I’m sure the figures are similar in other countries. And that doesn’t even count your back garden, the urban creek, the empty lot. Everybody lives near nature. Every kid lives near nature. We’ve just somehow forgotten how to see it.”
~ Emma Marris